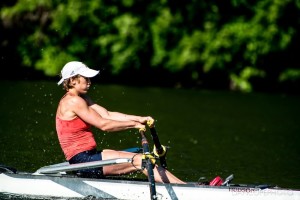 Michaela Copenhaver is a an olympic hopeful competing in the lightweight class of rowing. She currently trains full time out of Connecticut USA, and is hoping to make it to the 2016 Olympic Games. You can check out her latest results (Including some great finishes at the 2014 National Championships) on her website here. We asked Michaela five questions about her path to veganism, and she gave us some pretty awesome answers! Check them out below.

When did you first decide to go full vegan, were you vegetarian first or did you leap straight into the deep end?
I became vegetarian during Lent in 2011, my senior year of college, because meat seemed easier to give up than cookies. (I was definitely right on that one.) Before that I rarely went through a day without two meat-based meals. After school, I flirted with eating meat again, but was so terrible at cooking it that staying vegetarian was simpler.

In late 2012, I was traveling for a regatta and had no access to refrigeration. I’d just read John Robbins’ book “The Food Revolution”, so veganism was on my mind. Again, it was easier to eat vegetables than animals products that required refrigeration. I never went back.

What was the hardest thing about starting a vegan lifestyle?
At first, I really struggled with getting enough calories. Most of the vegan recipes seemed geared towards those who wouldn’t mind losing a few pounds, but I was burned 3500+ calories a day and kale salads just weren’t cutting it. I ate at least a jar of peanut butter a week those first few months.

Was there any food that was particularly hard to go without at the beginning?
I used to be a regular coffee shop muffin eater and I still miss good pastries. They’re becoming more common, but the selection is usually very limited.

What’s your go-to vegan meal?
My husband does most of the cooking, and does a fantastic job of creating awesome variety. Every meal, we try to incorporate a protein (tofu, tempeh, beans, fake meats), a grain (rice, bread and pasta, mostly), a veggie (so much broccoli!!) and a sauce (salsa, teriyaki, cashew cream, and way more). No two meals are really ever the same.

Except breakfast! I eat oatmeal Monday through Saturday and pancakes on Sundays.

Any advice for people thinking about giving veganism a try?
If somebody told you that you could only eat Japanese food starting next month, you’d go invest in some Japanese cookbook, maybe some new kitchen equipment and probably think about taking a Japanese cooking class.

Think of veganism the same way—it’s a whole new cuisine. Try adding a new vegan recipe to your repertoire once or twice a week for a year. Learn how to use cashews, tofu, and tempeh. Get familiar with your blender. Ask yourself what flax seeds, avocado and banana have in common. Buy a few new cookbooks! And chances are, you have a few recipes you already love that are vegan.

This is a post in the “Going Vegan” series. You can read more stories like Michaela’s, and also get in touch with us to nominate someone for Going Vegan here : http://www.theveganfoodblog.com/going-vegan/