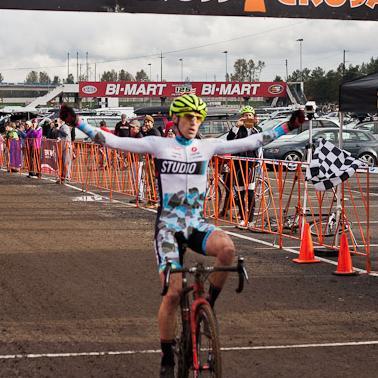 Molly Cameron is a cyclocross racer from the USA. Cameron is self described as “North America’s worst European cyclocross racer”! She is fueled by nothing but plant power, so we sent 5 questions her way to see what it’s like competing in these grueling races while being vegan.

When did you first decide to go full vegan, were you vegetarian first or did you leap straight into the deep end?
I went vegetarian in my early teens. I never liked eating meat so as soon as I could decide what I wanted to eat for myself, I did. I was on tour in a hardcore band in the late 90’s I decided to try vegan (after a week living on junk food) and focus on eating whole and unprocessed foods.

What was the hardest thing about starting a vegan lifestyle?
Initially it was double checking nutrition labels and asking “is this/can you make this vegan?” at restaurants! Cutting out animal products was not hard coming from a vegetarian diet. Basically: eating out was the initial challenge. But that was 15 years ago! These days, even small towns typically have a veggie restaurant or veg options on a menu.

Was there any food that was particularly hard to go without at the beginning?
Junk foods. I loved crappy processed snacks. It was a bad habit of mine to grab junk food from a corner store or grocery store and eat it for a quick satisfaction. Once I got out of that habit, I never went back.

What’s your go-to vegan meal?
Quinoa, kale, beans. It is simple and delicious. I’m an athlete, I need quick and healthy meals.

Any advice for people thinking about giving veganism a try?
Ease into it! And eat a lot! Eat foods that you like and are familiar and don’t stress about it. I’d rather see people try it out without beating themselves up over the minutiae in the beginning. It will take time for your body to adjust to significant changes in diet. Don’t stress about it.

This is a post in the “Going Vegan” series. You can read more stories like Madi’s, and also get in touch with us to nominate someone for Going Vegan here : http://www.theveganfoodblog.com/going-vegan/